na knows that tiny single-celled organisms have extraordinary properties. Her favorite, algae, is the mother of all land plants. Terrestrial plants, with roots, evolved from algae about 500 million years ago. Algae comes in all shapes and sizes from tiny to macro. Some algae species group and form communities of single cells that are visible to the naked eye.

Typical microalgae cells measure only about 5 microns across, (0.00004 inches). They are similar in size to a human red blood cell, or about 1/15th the diameter of a human hair. Algae display beautiful colors, textures and shapes when viewed under a microscope. Some microalgae aggregate in colonies that form chains or groups. Other microalgae, such as Spirulina, create colonies of single cells that string together and are visible to the eye.

Algae nano cells under a microscope

Even though algae are tiny, each day algae produce 70% of the world’s oxygen, far more than all the forests and fields combined. Algae grow so fast that each day they produce 40% of the new biomass. Algae are beautiful. British biologist Klaus Kemp is one of the last practitioners of the Victorian art of diatom arrangement, (at left). Diatoms are single-celled organisms found in oceans all over the world. There are estimated to be 100,000 species of these micron-sized creatures. They play a crucial role as one of the main food sources for marine organisms, including fish, mollusks and tunicates, such as sea squirts. The New York Times hosts a beautiful video on diatoms.

Algae offer the highest nutralence — nutrient density, diversity and bioavailability — of any plant or animal. High nutralence makes algae so attractive that nearly every animal on earth eats algae, from the tiniest shrimp, krill to the massive great blue whale. A 3-gram algae serving of algae provides the equivalent of at least one 3.5-oz serving of common vegetables or fruits, plus about 2 grams of protein – far higher nutralence than other plant foods, animal meat, or fish.

Phycology, the study of algae, includes the study of prokaryotic forms known as blue-green algae or cyanobacteria. Terrestrial algae live in or on soils and others live in symbiosis with lichens, corals and sponges. The basic single-celled organism, algae, has the general appearance illustrated below. The University of Montreal, U.C. Berkeley, University of Texas and others host culture collections of algae samples for sale and offer descriptive details and pictures.

Eukaryotic green algae, (Greek for “true nut”) plants have cells with their genetic material organized in organelles. They create discrete structures with specific functions and have a double membrane-bound nucleus or nuclei. The prokaryotic cells of blue-green algae, cyanobacteria, contain no nucleus, cell walls or other membrane-bound organelles.

Photosynthesis in an algae cell.

The above graphic shows the powerhouse behind an algae cellular biofactory, – photosynthesis in each cell.

The major groups of algae have been distinguished traditionally on the basis of pigmentation, shape, structure cell wall composition, flagellar characteristics and products stored. Algae display so many variations, even within each species, that they express exceptions to nearly every classification rule. 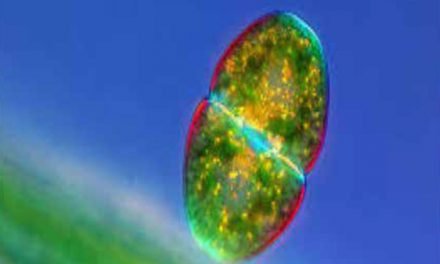