Nano-sized, single-celled algae are among Earth’s earliest life forms. They have been surviving in many of Earth’s harshest environments for 3.7 billion years. Algae’s simplicity enables these plants to be incredibly robust—they not only survive but produce high-value biomass in tough environments. In good cultivation conditions, algae produce protein and energy biomass with yields that are 30 to 100 times more productive per acre than land plants.

Algae are critical to life on Earth as they produce the organic matter at the base of the food chain. The biomass is eaten by everything from the tiniest krill to the great blue whales. Algae also produce most of the oxygen needed for other aquatic life and provide about 70% of our daily atmospheric oxygen.

Algae, the Latin name for seaweed, present themselves in all shapes and sizes. Microalgae are single-celled, microscopic organisms often smaller than 5µ (microns) wide. The period at the end of this sentence is about 100µ.

Algae grow all over the Earth, including under both ice caps. Their preferred environments are in damp places or water but algae are common on land as well as in aquatic environments. Soils, rocks, trees and ice contain dried algae cells and many are still viable. Various algae species grow in all kinds of water, which makes them excellent for pollution control.

Seaweeds make up about 10% of algae and there are larger species that live in marine environments such as kelp: brown seaweeds that may grow to 180 feet. Seaweeds may appear to have trunks and leaves similar to land plants but these structures are actually undifferentiated cells called pseudo-leaves. In tropical regions, coralline algae help build corals and support the formation of coral reefs and other species that live in symbiosis with sponges.

Away from the oceans, most algae live not in waterways, but in soils. Algae live symbiotically in the roots of land plants where they break down soil compounds and make the nutrients bio-available to the plants. The blue-green algae, also known as cyanobacteria, also serve crops by fixing nitrogen from the atmosphere in root nodules or directly on plant surfaces. Many plains, mountains and deserts are covered with algal crusts that hold soil in place, provide a foundation for plants with roots and hold critical soil moisture. Algae bioengineer building materials such as limestone, which is the material the Egyptians used to build the Great Pyramids. 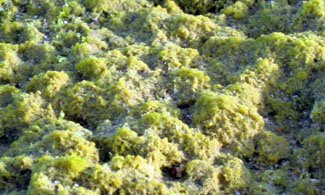 Various algae maximize different components. Some species offer over 50% lipids (oil), others 60% protein and others 90% carbohydrates. The food product, protein, of some species has little natural smell or taste so the product may take on the characteristics desired such as any smell, color, texture, density or taste. Blind taste tests between algae and soybeans favor algae because algae do not have the bitter, starchy taste of unprocessed soy. Like food grains, algae biomass benefits from food processing to maximize taste, texture, color and mouth appeal.

Algae are very efficient at converting light, water and carbon into biomass containing oily compounds (lipids) that may be extracted and processed into gasoline, green diesel or jet fuel. The remaining biomass, mostly protein and carbohydrate, may be made into foods, medicines, vaccines, minerals, animal feed, fertilizers, pigments, salad dressings, ice cream, puddings, laxatives and skin creams. An example of algae composition shows an algal species where 40% of the plant biomass is oil. 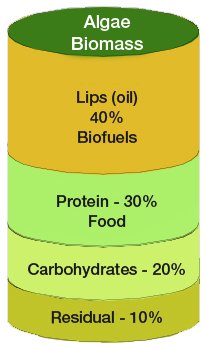 Algae Composition
Fat algae, also called oleaginous algae, are species that produce large quantities of lipids. Green algae may not look like a biocrude oil feedstock but the petroleum used in today’s vehicles is derived from prehistoric biomass that came largely from algae blooms in ancient wetlands and oceans.

Nature’s biomass decomposition began over 200 million years ago in the Carboniferous Period under conditions of enormous heat and pressure. Oil pumped from the North Sea consists of decomposed haptophyte algae called coccolithophorids. Algae also make up the major components of diatomaceous Earth, coal shale and coal. The Egyptians built their pyramids with limestone formed from algae.

Algae Advantages
The 30-100 times annual yield per acre productivity advantage for algae occurs largely due to the differences between terrestrial and water-based plants. Algae express themselves in a nearly limitless number of species and strains, which makes them a unique organism. Several key characteristics differentiate algae from terrestrial plants.

Algae are water-based organisms that grow in fresh, saline, brackish, seawater or wastewater. Land plants require fresh water for growth because large salt ions clog their plumbing, root system, starving the plant of water and nutrients. Algae flourish in saline water because they evolved in very salty ancient oceans. Salt ions pose no problem for algae because algae have no roots.

Algae developed critical growth, propagation and survival strategies in their several billion of years on Earth. Land plants evolved from algae only 500 million years ago and require an entire growing season, 120-140 days to produce seeds for a new generation. In the time land plants grow through one generation, algae may propagate through millions of generations because algae have no growing season. Algae are different from land plants in many ways.

Algae are robust organisms that offer many advantages compared with land-based crops. Algae remain the most underdeveloped organism on Earth. Domesticating algae to gain its many benefits presents one of the most engaging challenges of the 21st century. 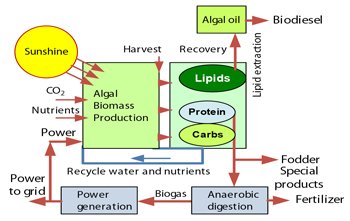 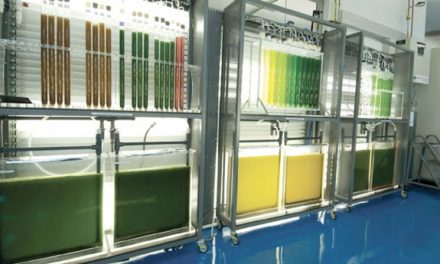 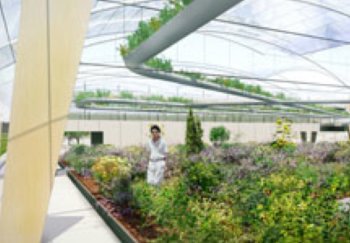